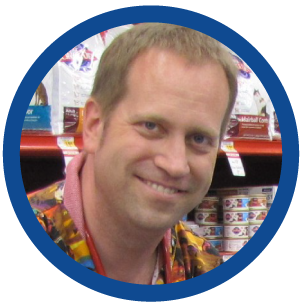 Dr. Scott Emch is originally from New City, New York, a suburb 25 miles northwest of New York City (it’s why he talks so fast, although his accent has pretty well been lost after going to undergraduate college at Virginia Tech 1981-1985, then going to vet school at Purdue from 1985-1989 and staying here since!).

Scott enjoys dermatology and educating clients on wellness care. He enjoys his clients and their pets immensely and has a somewhat laid back approach to veterinary medicine (although his staff would argue that this is the only place where he and the phrase “laid back” could ever coexist!). Scott enjoys harassing and being harassed by his staff-he gives them lots of material. He also thinks there is a tremendous amount of humor to owning pets and enjoys laughing with his clients at their pet’s antics and the common bonds that we all share by owning pets and being owned by them!

Scott has 2 dogs, an enthusiastic fetching obsessed chocolate lab named Miles and a cuddle cushion cavashon named Floppy. He also has 2 cats- an extremely talkative ragdoll named Serendipity and Sahara who was bottle fed and raised by Scott’s wife, Mary Anne, and a previous dog named Pilgrim.  Because of this, Sahara has no idea he’s a cat and believes he’s half human and half dog.

Scott and Mary Anne have been married for 25 years, during which time Mary Anne taught him how to speak “Boo Boo Kitty”- revolutionizing his ability to work with cats. They have 2 children- David, a pre-med student at Butler who plays trumpet and has an appreciation for good jazz music; and Rebecca, who attends Noblesville high school and is gifted with a lovely voice and a passion for singing.

Scott’s hobbies include landscaping, “puttering” on various projects, singing with the band at his church, playing harmonica, enjoying good movies with his family and above all else the rare gift of unscheduled time.